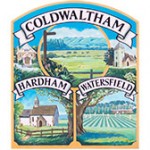 The attraction of motor cyclists to Whiteways and Bury Hill now seems to extend to Saturday and Sunday; I am sure that some motor cyclists may have clocked 80+mph through the villages. We all appreciate that our Police are stretched but it is important to keep asking for more speed patrols. We will be pursuing this as a priority this summer, to both encourage the police camera patrols to extend their work to weekends, but also to set up again a Village based scheme for speed monitoring.
Transport is a recurring theme this month; we hope that not too many journeys have been disrupted by the troubles on Southern Rail, and the night time works on the track are not disturbing too much sleep. The changes to timetables for this work were in the last edition. Some work has been done to “top dress” Waltham Park Road, but there are still some very dangerous edges which have not been filled – so please continue to take care to and from Fittleworth; it is worth continuing to remind “Highways” of this problem.

The positive opportunities mean that the pavilion and other works at Alban Head have now been completed. We hope to also install another new picnic table to add to the attractions. We are also pursuing the need to “do something” about Alban Head access, as next season there may well be three football teams using the ground at different times. We hope that the Football Club will continue to thrive and do well in the restored building, and that the cricketers will enjoy a trouble free summer.

The building programme at the end of Silverdale has now started. The grounds looks a ghastly mess during the cutting and laying out process, so we hope that Trinity Builders will quickly move into the next phases. So far traffic disturbance has been minimal, but some of the small “sinking” patches in the approach roads appear to have got deeper recently. We were approached by the developers, Stonewater, as to whether we had any views on a name for the new Close. Some discussion brought the name “Shackleton” to the surface, as a famous name from St.Giles churchyard. We hope you will all approve “Shackleton Close”

It was announced this month that South Downs National Park had been successful in its bidding process to be declared as having “Dark Skies” areas, where night lighting is reduced to keep the natural light rhythms in play as much as possible. It probably does mean that it would not be possible now to install any street lighting; it may also have some impact on planning matters, as “skylights” may well not be allowed due to their uncontrolled diffusion of light into the sky – we shall have to wait and see. In the meantime, it does mean we can see stars, planets and aircraft more clearly!

Our village web site is nearing launch date. We hope to have it open to public viewing and use for June 1st. We shall be trying to cover as much village activity as possible, but it will rely on contributions if we are to keep it properly up to date. We will publish the web address in the next edition of The Link.

Finally, to mark HM Queen Elizabeth’s birthday celebrations, the Council has opted to offer a commemorative medal to each of the children at St.James, to mark this event in June.